This is an abbreviated version!
For detailed information about toluene 4-monooxygenase, go to the full flat file. 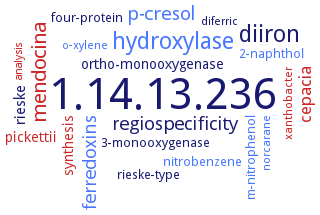 1.14.13 With NADH or NADPH as one donor, and incorporation of one atom of oxygen into the other donor

Go to Crystallization (commentary) Search
Please wait a moment until the data is sorted. This message will disappear when the data is sorted.
comparison of X-ray crystal structures of resting and reduced mutant T201A in complex with effector T4moD with structures of wild-type reveals changes in the positions of several key active site residues
Pseudomonas mendocina
Q00456
740048
crystal structures for native T4moD and variants with either four (DELTAN4-), or 10 (DELTAN10-) residues removed from the N-terminal at 2.1-, 1.7-, and 1.9 A resolution, respectively. Alterations of the N-terminal have little influence on the folded core of the protein
Pseudomonas mendocina
Q00459
740042
fluorescence anisotropy study of the protein-protein interactions. Binding interactions are detected between T4moD and the hydroxylase component T4moH and between T4moD and the Rieske [2Fe-2S] ferredoxin component T4moC. No binding interactions are detected between T4moD and the NADH oxidoreductase component T4moF, but T4moF is able to disrupt binding between T4moC and T4moD
Pseudomonas mendocina
Q00456; Q00457; Q00460; Q00458; Q00459
740045
high-resolution structures of toluene 4-monooxygenase hydroxylase complexed with its electron transfer protein ferredoxin and comparison with the hydroxylase-effector structure. Ferredoxin or effector protein binding produce different arrangements of conserved residues
Pseudomonas mendocina
Q00456
741045
homology modeling. Residue I100 aids in steering the substrate into the active site at the end of the long entrance channel
Pseudomonas mendocina
Q00456
739898
solution structure of the T4moD effector protein. The secondary structure of T4moD consists of three alpha-helices and seven beta-strands arranged in an N-terminal betaalphabetabeta and a C-terminal betaalphaalphabetabetabeta domain topology. The region around Asn34 may be involved in structural aspects contributing to functional specificity
Pseudomonas mendocina
Q00459
740038
structure of toluene 4-monooxygenase ferredoxin oxidoreductase subunit Tmo4F, to 1.6 A resolution. Structure includes ferredoxin, flavin, and NADH binding domains. Close contacts between the C8 methyl group of FAD and [2Fe-2S] ligand Cys36-O represent a pathway for electron transfer between the redox cofactors. Subunit T4moF [2Fe-2S] ligand Cys41 and T4moC [2Fe-2S] ligand His67, along with other electrostatic interactions between the protein partners, form the functional electron transfer interface
Pseudomonas mendocina
Q03304
740073
structures of toluene 4-monooxygenase hydroxylase in complex with reaction products and effector protein. Active site residue F176 traps the aromatic ring of products against a surface of the active site cavity formed by G103, E104 and A107, while F196 positions the aromatic ring against this surface via a pi-stacking interaction. Effector protein binding produces significant shifts in the positions of residues along the outer portion of the active site (T201, N202, and Q228) and in some iron ligands (E231 and E197), but minor shifts ae produced in F176, F196, and other interior residues of the active site
Pseudomonas mendocina
Q00456; Q00457; Q00460; Q00459
740052