This is an abbreviated version!
For detailed information about Lactocepin, go to the full flat file. 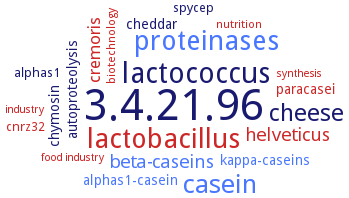 Endopeptidase activity with very broad specificity, although some subsite preferences have been noted, e.g. large hydrophobic residues in the P1 and P4 positions, and Pro in the P2 position. Best known for its action on caseins, although it has been shown to hydrolyse hemoglobin and oxidized insulin B chain =

show all columns Go to General Information Search
Please wait a moment until the data is sorted. This message will disappear when the data is sorted.
physiological function
Lactococcus lactis subsp. lactis
-
compared to wild-type, protease PrtP knockout mutants show higher bacteriocin activity that has lost its growth-medium dependence. Lack of PrtP stimulates lactococcin LcnB activity and interdependence of LcnB activity and casitone concentration is lost
731866