This is an abbreviated version!
For detailed information about L-lysine 6-oxidase, go to the full flat file. 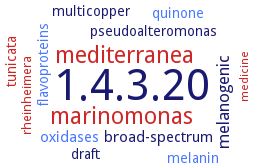 1.4 Acting on the CH-NH2 group of donors

Differs from EC 1.4.3.13, protein-lysine 6-oxidase, by using free L-lysine rather than the protein-bound form. 2-N-Acetyl-L-lysine is also a substrate, but 6-N-acetyl-L-lysine, which has an acetyl group at position 6, is not a substrate. Also acts on L-ornithine, D-lysine and 4-hydroxy-L-lysine, but more slowly. The amines cadaverine and putrescine are not substrates
-
-
0