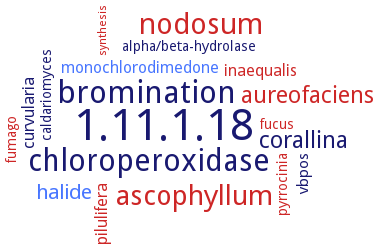 show all columns Go to Application Search
Please wait a moment until the data is sorted. This message will disappear when the data is sorted.
synthesis
Ascophyllum nodosum
-
immobilization of enzyme on magnetic micrometre-sized particles in quantitative yields, with up to 40% retention of initial bromoperoxidase activity. The immobilized enzyme is stable with a half-life time of about 160 days. It serves as reusable catalyst for bromide oxidation with H2O2 in up to 14 consecutive experiments. Immobilized enzyme is used for methyl pyrrole-2-carboxylate conversion into derivatives of naturally occurring compounds e.g. from Agelas oroides with product selectivity of up to 75%
725111